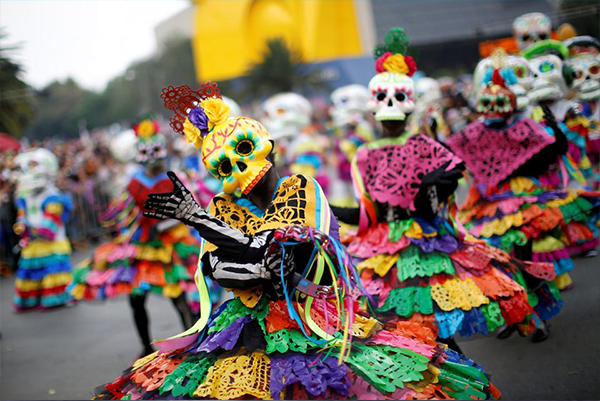 How to Survive Mexico’s Day of the Dead Festival

As Halloween approaches here in San Diego we are not strangers to the Day of the Dead or Dia de los Muertos as it’s called in Spanish. There are always many celebrations around our town and in other towns close to Mexico. But if you really want to get a feel for this amazing holiday you need to travel a little further afield.  This great article is brought to us by World Nomads, one of the best travel insurance companies in the business, recommended by lonely planet ad Nat Geo.  If you’re ready for some adventure south of the border, read on! The article tells you were to go, what to see and how to make the most of your Dia de los Muertos experience.

Travel in Mexico can get you to some of the biggest day of the dead festivals,, the gloriously grizzly Día de los Muertos (Mexican Day of the Dead) is not only a colorful expression of the Mexican psyche (which both accedes to and makes light of our mortality) it’s a damn good time.

Cemeteries make unlikely settings for a party, or so you would think. Don’t play dead – read on!

From October 28 to November 2, Mexico celebrates, with just a whiff of irony, the return of departed souls. During this riotous kitsch fest, markets, shops, homes and cemeteries are emblazoned with mini coffins, candy skulls and whimsical folk art known as Calaveras: papier-mâché skeletons riding bicycles, playing the guitar or getting married.

If you want to indulge in a lighthearted vision of eternal life, it’s time to suspend disbelief and get cracking on your own alter (ofrenda), the mythical conduit to Mictlán (the Aztec’s notion of a spiritual antechamber). 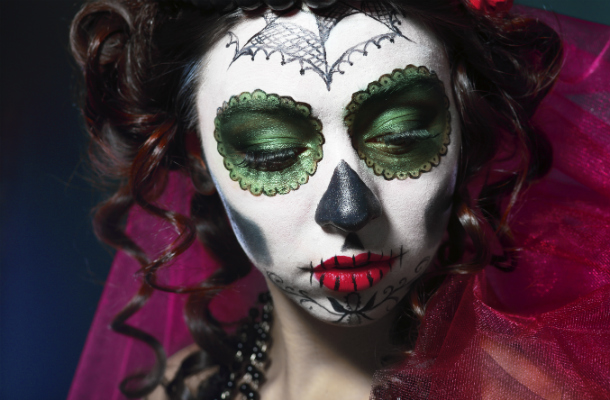 How to join Day of the Dead festivities

The customary way to beckon your beloved is to join the maddening crowds at the market and purchase the biggest, brightest bunch of marigolds (cempazúchitl) that you can find. Then, strap them on your bike and head to the bakery for a few loaves of the season’s signature delicacy: pan de muerto (bread of the dead). The dead require carb-rich sustenance to ensure they get back to the nether regions in fine form.

At midnight, Mexican families decamp to the cemetery, loaded up with the dead person’s favorite meal (generally a classic Mexican dish such as envueltos—wrapped tortillas stuffed with chicken mole). Elaborate ofrendas feature candles, flowers, personal mementoes, photographs and, more often than not, a statue of Our Lady of Guadalupe (every Mexican’s favorite saint).

As the dead are adept at doling out prosperity or affliction according to how much effort their nearest and dearest have devoted to the preparation of their ofrenda, there’s a fair amount of one-upmanship. Until the early hours, families gather around gravestones, eating, drinking tequila, singing songs and reminiscing about the departed. Elderly matriarchs enshrined in heavy wool blankets wait for their bell to toll.

In touristic areas, a more opportunistic mood prevails with mariachi bands offering their own classics (for a fee) and children hawking religious figurines.

The Most Authentic Places to Experience Day of the Dead

If you are keen to immerse yourself in Mexico’s indigenous traditions, it’s important to plan ahead and choose your location wisely. Celebrations reach mythical proportions in southern Mexico where indigenous culture is strongest. If you can leave behind the tourist trinkets and abandon the vigil-come-party frenzy, Day of the Dead comes about as close to an out-of-body experience as you can get. It’s worth remembering that in remote locations, infrastructure can be basic and finding a place to stay virtually impossible. 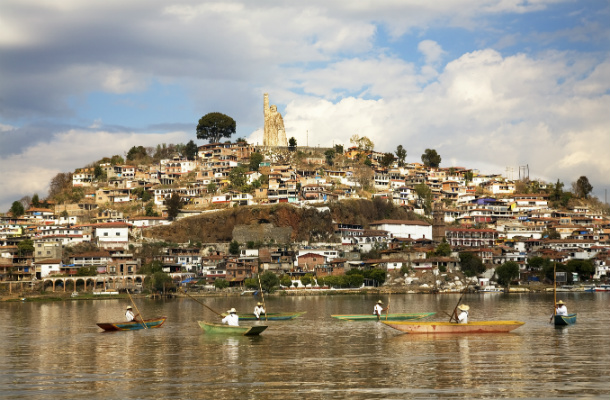 It’s no surprise that in the native lingo, Lake Pátzcuaro translates as the “place where one finds stones that mark the entrance to paradise.” Clearly, the indigenous Purépecha have always lived with one eye focused on the next world. Even (or rather, especially) outside of Día de los Muertos, the six islands of Lake Pátzcuaro (Jaracuaro, Tecuena, Yunuen, Pacanda, Janitzio, and Uranden) represent one of Mexico’s most intense spiritual experiences.

For Day of the Dead, as many as 100,000 tourists converge on Pátzcuaro to witness the Purépecha commune with the netherworlds and perform outlandish rituals in the local cemetery.

Janitzio Island is the feverish epicenter for tourist activity; the arrival of canoes draped with flowers ushers in the nocturnal celebration in honor of lost souls.

On the islands of Yunuen and Uranden, the preternatural aura remains tangible despite the festival’s increased commercialization and tendency towards inebriated revelry.

Day of the Dead Destinations: Pomuch

On Day of the Dead, in a small town called Pomuch in the Yucatán, custom dictates that relatives visit the cemetery, exhume the bones of their deceased relatives (they must have been dead for three years) and participate in a ritual cleaning of the remains. The newly buffed bones are placed on a wooden box and covered with a cloth mantle embroidered by the deceased person’s significant other. The skeletal remains are then placed in open ossuaries until the following year when the bones will be cleansed once again.

The tradition, which dates to ancient Mayan practices when the skulls of ancestors were revered, is fervently observed. Any families caught slacking will incur the wrath of the dead relative who will prowl the streets of town for eternity.

Day of the Dead Destinations: Xochimilco

Designated a Unesco Word Heritage Site, the placid water ways and artificial islands (known as chinampas) of Xochimilco (30 miles from Mexico City) are the last vestiges of an ancient system of farming that became the economic foundation for Aztec hegemony.

Day of the Dead is a kaleidoscopic extravaganza as local families, resplendent in their traditional dress and visitors navigate the maze of islands on whimsically decorated wooden boats called trajineras.

You can hire your own boat, complete with a mariachi band, and purchase samples of the season’s culinary offerings from entrepreneurial vendors on passing boats. Around midnight, a more ethereal mood holds sways as locals head to the cemetery of San Gregorio Atlapulco for an all night candle-lit vigil beside graves carpeted with marigolds.

Day of the Dead Destinations: Oaxaca

Oaxaca loves a party. With its renowned artisanal flair, strong indigenous traditions and acclaimed molecular cuisine, observances of Day of the Dead in Oaxaca are rich and highly seductive.

The city’s cemeteries provide the stage for a theater of the absurd with fun fairs, vendors selling candy crucifixes and dance troupes performing with atavistic abandon. There are countless evening processions called comparsas and homes are lavishly decorated. Many Oaxaqueños dress up as Catrina, an icon of Day of the Dead celebrations.

The creation of famed Mexican artist Jose Guadalupe Posada, Catrina (with her white painted face and aristocratic glad rags) satirized women who denied their indigenous heritage in favor of what they deemed European sophistication during the pre-revolutionary era. 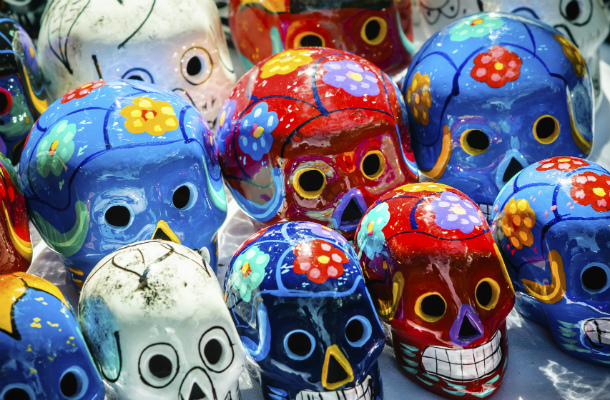 Day of the Dead Practical Tips

Día de los Muertos is one of Mexico’s most popular and honored festivals. As such, hotels and hostels book up way ahead of time and delinquent planners will find getting around a complete headache.

As always, common sense protocol should apply in crowded settings.

When visiting cemeteries, even a basic knowledge of Spanish will facilitate your immersion into the festive rituals. In most locales, you’ll find an upbeat spirit prevails and, generally, families are keen to share stories about their departed and welcome you into their jovial enclave—a few shots of tequila can help you quell any residual First World cynicism. While most Mexicans will happily debate their supernatural proclivities, some families prefer to maintain a dignified silence and would clearly like to be left alone.

Now that you’ve read all about the Dia de Los Muertos I’ll be you’re ready to book your trip south of the Border.  Remember, you’re going to a foreign country and your health insurance won’t work in Mexico. Read my blog to see some great reasons why you should ALWAYS travel with international health insurance.  Check out all my policies here: https://healthisinternational.com/international-travel-insurance/